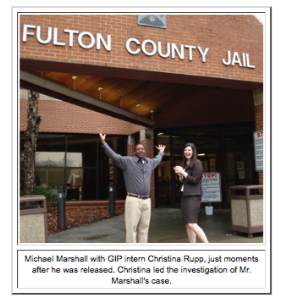 Last month, Michael Marshall was released from prison, where he served time for a crime that he did not commit. Eyewitness identification and neglect to investigate the physical evidence led to the incarceration of an innocent man. The lawyers and interns at the Georgia Innocence Project proved Mr. Marshall’s innocence through DNA testing and will continue to help him rebuild his life after exoneration.

In 2007, an eyewitness identified Mr. Marshall ten days after the crime in a prejudicial “show-up” identification. He was charged with armed robbery, aggravated assault, possession of a firearm during a felony, and possession of a firearm by a convicted felon and he faced up to 25 years in prison. After the judge denied his motion to suppress the identification evidence, Marshall pleaded guilty to theft by taking out of fear of the lengthy potential sentence.

The principal evidence against Mr. Marshall was misidentification by a victim of the crime. After watching a man steal his mother’s truck and threaten her life, the male victim gave the Hapeville Police Department information to create a composite sketch of the man who committed the crime. Ten days after the crime, officers called the victim to Mr. Marshall’s location, where he identified Mr. Marshall. The other victim failed to pick Mr. Marshall out of a photo line-up.

Eyewitness identification is often faulty and has contributed to the wrongful convictions of more than 75% of the 247 people exonerated by Innocence Projects nationwide. The kind of identification in this case is called a “show-up” and is highly prejudicial because of the suggestive context of the situation. The suspect is surrounded by police officers, often located near the scene of the crime, and alone, rather than lined up with 5 other people.

The Hapeville Police also failed to investigate the physical evidence in the case. Although they had found a cell phone, a cell phone case, and a t-shirt belonging to the person who committed the crime, these items were never even fingerprinted, let alone tested for DNA, until the Georgia Innocence Project got involved.

The Georgia Innocence Project has exonerated eight people of crimes that they did not commit. All of those convictions were based on mistaken eyewitness investigation. We are delighted that they have again helped a victim of eyewitness identification to prove his innocence.

Photograph used with permission from the Georgia Innocence Project.